You mean to tell me that is when windows is not functioning. I thought that was all it did. You install it then get BSOD. Thats it! Done finished.
You know The funny thing is if they used a linux base kernel. It would not be as imbarassing as a BSOD, cause the only to see if the kernel is locked up is when your caps lock key keeps on flashing I didn't see any keyboard at that terminal. 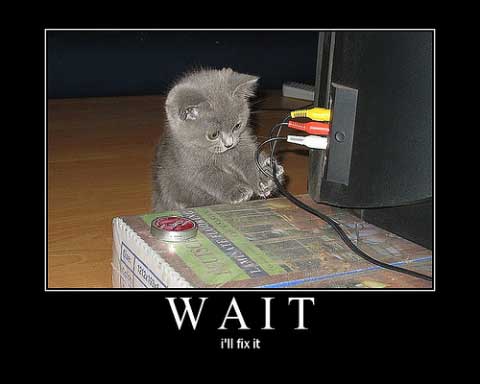 500.jpg??
Sorry guys... I got to go. My girlfriend just casted "get your dirty ass into the shower" on me.
Oh and here is some naked grandpa pictures too.
Top

That is, unless you have to figure out what those things are to repair PCs burdened down with the trash that causes those!

Give a desperate PC with Windows and walls grub, and you might just start resuscitating it! Give it some Mint, and you'll freshen the experience. Give it a Live experience, and you'll bring it back to life and liven it up!

See if you get this one, guys!

Some parts that are not so obvious to those new to this are italicized.

The colonel marches through the lines, going through the onslaught. It takes beryl with it, smashing through the Glass that the world thought so beautifully of, as it masters the hidden labyrinth of NTFS that its enemy thought could be hidden forever. It marches on to the world of exFAT... turning to the orb to squish it. Putting on app armor, it races through the firing of viruses, worms, and trojans of the outer world, utterly laughing in the fields of green grass on blue skies that so encompass it. All is not lost as the other colonel, which got MS since the dirty days of taking DOS from an otherwise known controller by mere clevery,

, races through to auroras of automated goodness the enemy colonel prepped for its users, it says, in an attempt to control the deluded of the closed, cold windows, whose users are dumbed down to flashy glows with an arrow and steady state. Flying molecules of light collide as lines scroll, but both work at fighting over the cloud. But the penguin colonel continues on, knowing the MS, if not the malware, will eventually cripple the beautiful, missy colonel that was once was known as being the windows that controlled the world with walls.....
Top
Post Reply
17 posts