In Montreal, we should be on the top of the curve this weekend.

^
Do they plan to reduce the measurements?

At least in Germany it is obvious that even now too many people do not get it that a too steep curve is not only a potential danger to themselves but to others as well.

Then again, most have been following the trend of the last decades: consume and ignore human mortality, and now they cannot do the former and are forcefully confronted with the later. Who would have guessed that such ongoing behaviour would create egoists.

We are looking at what is going on in Germany your country and in South Corea. And we are trying to do the same: social distanciation, testing and isolating the sick. If you walk with someone in the parks and that you do not respect the two meters distance, you can get a $1600 fine, if you cannot prove living at the same address. To keep them virus free, some unaffected and distal regions to the metropolis of Quebec, namely Montreal have been closed using police roadblock.

I think the Swedish people will not be that different from e.g. Germans.
Unlike the Italians we all seem to not have a 2nd behaviour mode - an mode for catastrophes.
In Germany, the weekend where Bavaria was the first to install restrictions (20th March) on movement and the rest of the federal states waited they asked the citizens to isolate, but too many would not comply, so the reasonable majority (I can only speak for the small town I now live in, usually nutcases are more often to be found in larger cities) has to suffer because of the few unreasonable. In the weekend mentioned they tried to talk sense too the people but because school was cancelled too many young idiots did make Corona-parties. And older ones did, too. So the people all had the chance to avoid a shut-down, but a minority, but a too large minority of idiots ruined that.
And in Germany, due to its past with the 3rd Reich - restricting the freedom of the people is only possible to counter a pandemic, and they can only give fines when such restrictions are active, prior that they could explain why it is wrong, but could enforce nothing.

And while now the social distancing in still in effect, at the beginning of the Easter holidays I saw more cars with number plates from places more far away than usual.

Now at least in the Free States of Bavaria and I think also Saxony you are not allowed to visit relatives, even close relatives when you not live together with them.
The cars with the far away number plates are just a guesswork, but I did not see that many out-of-region cars in the weeks prior, but now during the free days due to Easter I saw these cars.

Anyhow, it is like another example of mine: when it comes to environmental protection, most people are for that. But when it comes to themselves and environmental protection would restrict the people (like a meadow being restricted in some months in summer from entering due to storks needing it as resting place) too many people ignore that and go for a walk with their free-running dog!

It seems people either have been intelligent all along, or have been idiots all along. And by idiots I do not mean the usual approach, now one sees people who seemingly have good paying jobs, have finished higher education, probably even studied at university, but when it comes to basic intelligence and being able to really think for themselves and understand which restrictions make sense, and which do not, more than 50% of people still seem to be idiots.
Two examples of restrictions making no sense: doing sport in nature is allowed. Sitting on a park bench by yourself is not: no sport.
Swimming in a lake is allowed (sport), afterwards laying in the sun to dry and get warm is not (no sport), even when there are no people around you for 10 metres in every direction: sunbathing and park bank sitting are still not allowed. These examples of restrictions make no sense.

What also makes no sense when police is out in groups, not having at least 1,5 metres between themselves, to control the parks if anyone breaks the restrictions: yes, all you cops do break the rules! Do they believe a virus would spare them cause they wear uniform? That is not how viridae work.

Seems Corona-Chan not only highlights the mismanagement in the healthcare system - why again was it ever a good idea to think hospitals need to be profitable? - but the issues many people in the richer western countries have all along.

In a situation like a pandemic where one mistake by one people not only affects him or her and probably the one who gets infected due to stupidity still not gets the bad case of Coci-19, but maybe only slight symptoms or no symptoms at all) - such a person can infect others who again infect others, with high chances of some severe cases of illness coming out of one idiots wrong behaviour.

But like I wrote in a previous post: what should one expect when people in the rich western countries have been taught to best ignore the own mortality and dive into escapism and consumerism instead. We all knew that such would not create the most social of humans. And now thanks to Corona-Chan such proved correct.
Cheers!
Yours Rava
Top

Could it the the mess the USA is currently in is self-made? E.g. bad decisions in the recent past by the still governing USA administration?

Lets ask the internet, shall we? 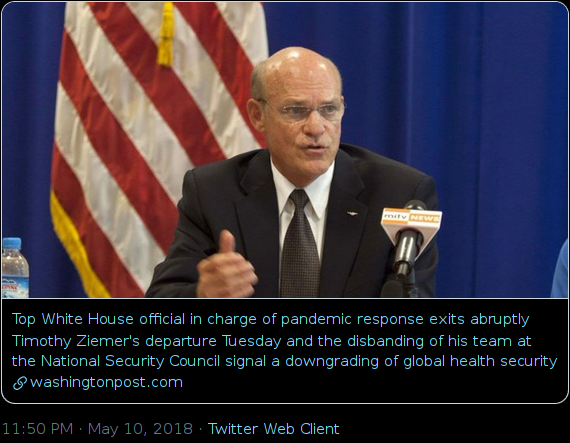 Oh, no preparedness for a pandemic since Mai of 2018. Who would have guessed that such idiocy could ever backfire.

But another more important question: did any of you really thought changing the health system so that hospitals need to be profitable was a good idea?

Why not do the same for the fire department? Only pay them when houses are really burning, or a flood threatens to drown people.
Sounds like a bad idea? Indeed it is, but the same is true for the recent (as in: last 15 to 40 years, depending on country) changes of almost all wealthy western countries health systems.

I just hope people remember this in a year or so and demand the health system be changed back to a sane state it once was.

I am dead serious here, it about the health and therefore immediate future for all of us.
Cheers!
Yours Rava
Top

"We will take your breath away"
The blond variant is a different "strain". A "Westernized" variant if you will

Corona-Chan demonstrates to Ebola-chan how its done.

All these images I found back in March and they are still so … up to date.

About the last one, the one mentioning Corona-Chan wanting to visit Madagascar, when the image was made it was true that that island was Corona-chan-free. And now?
https://www.worldometers.info/coronavir ... adagascar/ now says

So yes, people indeed did help Corona-Chan "visit" that island.

But we must see that dying with Corona-Chan (but there are more raesons than Corona-Chan that a person is severe ill) is not the same as dying because of Corona-Chan !


(All these and more can be found on https://safebooru.org )
Cheers!
Yours Rava
Top

Finally they done it, the last day of freedom has come.

Regardless of living in a hotspot area or not, most countries of Germany, including mine which is the largest, have a stricter lockdown 2.1 from Wednesday onwards, putting all people in open prison: you cannot be out from 21:00 to 05:00 without valid reason, and the said fine for disobeying is at least 500€ (according to the public broadcasters radio news).

They say it is against groups of people drinking, wearing no masks and ignoring social distancing… but we have winter weather, such things happen in summer, not in the end of autumn or in winter.

And by doing so they give arguments to the already turned violent Reichsbürger (kind of the German equivalent of the Sovereign Citizen movement), Querdenker and other people who fall for every fake news when it only is against the anti-corona measurements, be these measurements reasonable or not.
Cheers!
Yours Rava
Top

Folks do not fall for 8 months Corona-Chan brainwashing!

With these new strains EU got GB over a barrel fior Christmas.

So, seems Singapore shows a new and frightening way in handling the situation, or should I call it: abuse the Covid19 excuse to better the Orwellian mass surveillance.

From the 1.st week of Jan 2021 newsletter of https://netzpolitik.org <- its a German group but they also have articles in English.

Surprise: The police in Singapore are allowed to use data from the state contact tracing application [ https://netzpolitik.org/2021/polizei-in ... ng-nutzen/ ] Interior Minister Desmond Tan announced earlier this week in the city-state parliament. The application for tracking corona contacts has expanded its purpose and is now also used for criminal prosecution. The TraceTogether app works like the German Corona warning app with Bluetooth technology, but it is less privacy-friendly. The police are happy, after all, the use of TraceTogether will soon be mandatory for residents of Singapore.

________
Yes, that was a reference to "Welcome to the Machine" - the second song on Pink Floyd's 1975 album Wish You Were Here. It is notable for its use of heavily processed synthesizers and guitars, as well as a wide and varied range of tape effects. - https://www.youtube.com/watch?v=lt-udg9zQSE