Please reproduce your error on a second machine before posting, and check the error by running without saved changes or extra modules (See FAQ No. 13, "How to report a bug"). For unstable Porteus versions (alpha, beta, rc) please use the relevant thread in our "Development" section.
Post Reply
291 posts

see my edited post above ^ about sudo su
why is this so? .. idk .. maybe sudo makes some sort of dbus connection that su doesn't?
Forum Rules : https://forum.porteus.org/viewtopic.php?f=35&t=44
Top

Here are the errors when trying as native root:

and here the errors trying as sudo -u guest:

Another issue, took one of my several 8 GB USB sticks, but a rare one with small 2nd Linux partition for rootcopy, copied 5.0rc2 on it and my trusty kernel 5.4.30, moved stuff away from too full small ext2 partition and wanted to umount both its partitions, alas this ensued: 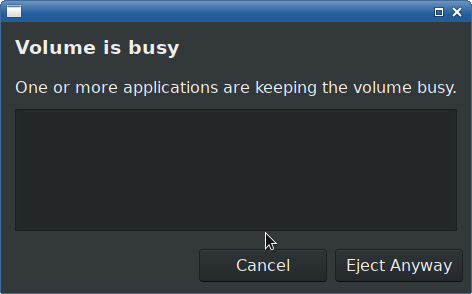 how to safely umount it without a reboot?

On the other hand, its an ext2 partition, Linux should be able to fsck the partition… without data loss.

After Eject anyway this happens:

dfree and mount do not list /dev/sdd2 as mounted, while fsck insists its in use. Whut?

and failure even with your variant via root su -l guest -c :

be aware at some time I quit the playing as guest via pressing "q" in mpg123 or mpv, and mpv even lists the time in song I did so.

I did press no keys waiting for the root via su mpg123 or mpv to play.

Since mpv is more verbose here its difference playing via pulse - or trying to:

pulse is a bit of special case, i guess..
funny thing: here, in openbox/sakura/dev-base for root it just works:

I could try that, too, but what is dev-base for root?

Also how to tell mpv to be more verbose.

and --msg-level=all=no is less verbose.

is valid but unhelpful, then why is

Also thanks for the info on mpv's log levels, would be nice if they put that into "mpv --list-options", also why do they have -h=string when there is no more info that way:

In my case, trace and debug give the very same info, and not a more helpful one as well than the standard verbosity:

is no more helpful than

Added in 12 minutes 55 seconds:
but when it works for you on openbox/dev, then the issue must be somehow with either rc2 to your rc2-pre-rc3 version sans DE, or with rc2-pre-rc3 openbox vs rc2 XFCE including DE, or not?

But I would need rc2-pre-rc3 "root-dev" in both XFCE and Openbox variant to check out if there could be a hardware issue as well, I do use the Nvidia GPU driver (and an older kernel because of the NV driver, le sigh) and it could be that the driver not only handles the GPU but the Nvidia sound chip or chips as well. I would have to start up my 5.0rc2 one time with native NV GPU driver, and one time with nouveau and compare the info on the sound drivers that Porteus reports back into the running system to know for sure.

The Toshiba Satellite Notebook has both IBM and NVidia sound hardware, and that might make it even trickier for Porteus or any Linux that is not Knoppix (<- seriously, best hardware compatibility or any Linux I have ever known)
Cheers!
Yours Rava
Top

I use quote instead of code to be able to show you the output in colour.
The original /usr/local/bin/fastest-mirror gives a bold green success message even when the update failed - ran fastest-mirror as guest:

and here the output of my script version of fastest-mirror - as guest:

Would you like to add http://ftp.nluug.nl/os/Linux/distr/porteus/ as your main Porteus server? [y/n]
Porteus server updated in /etc/porteus.conf

And here the diff between the original and my script version:

Here the complete script code for the ones unaware how to apply changes via diff:

and finally the md5sums of the original and my version:

and a small serverDialog window with a blank VNC server: box.

and a small serverDialog window with a blank VNC server: box.

and in both systems when the vncserver is up I connect.

All dependencies seem to be met:

Same as above, all dependencies are met:

palemoon.org changed the name of the most recent Palemoon to palemoon-28.17.0.linux-x86_64-gtk2.tar.xz and partly browser-update gets it, in the end it failed.
See for yourself:

There is no such file downloaded into /mnt/ext3/Porteus_modules/5.0/palemoon
Also, why downloading when the local file palemoon-28.17.0.linux-x86_64-gtk2.tar.xz should be the one being processed.
Cheers!
Yours Rava
Top

already fixed on the server